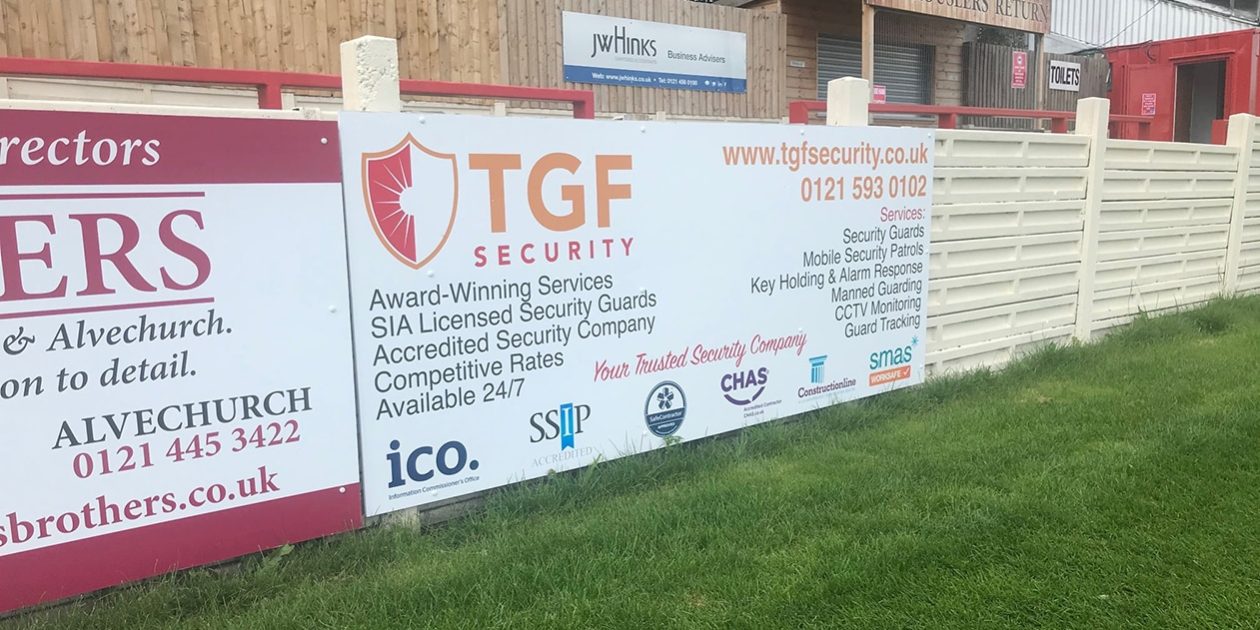 As a local security company, based in Birmingham, UK, we pride ourselves with keeping our local communities safe and secure. However security is not always physical, and often materialises through economic support. As such, we feel it is paramount to support local business, which is why we recently decided to sponsor our local club Bromsgrove Sporting F.C., or, as we call them, The Rouslers.

Due to the immense financial pressure the coronavirus pandemic has put, and is still putting, on smaller local business it is incredibly important for communities to band together to stay afloat.

The Rouslers give is good reason to do so. Since their inception in 2009, they have slowly worked their way up from the Midland Football Combination’s Division Two to their current place in the Southern League—proving to be a local shining light with a presence in the national footballing world.

In some respects, however, what’s more important to us is all the individuals this sports team touches. From the beginning, Bromsgrove Sporting had a consistent viewership of around 300 keen fans. But during the 2018-19 season The Rouslers’ home games averaged turnouts of 952 supporters, marking them as the 43rd best-supported team in non-league English football. Seeing that The Rouslers have had such a profound effect on the local community, both in and around Bromsgrove, really drove us to provide our donation to the club, and sponsor them.

With the shockwaves of the pandemic resonating through the country, and economic uncertainty endlessly rearing it’s ugly head, we feel privileged to be in a position where we are able to sponsor our local club, becoming one of the many business and individuals dedicated to keep the sporting heart of Bromsgrove alive.

Alongside our £250 donation to help support Bromsgrove’s local Men in Sheds initiative, spearheaded by Age UK, this makes for our second donation to local businesses in recent months.

If you are in a position such as ours, where you have enough funds to help local businesses stay afloat during these troubled times, we wholeheartedly encourage you to consider donating and sponsoring such projects. It is certainly not money lost, as many businesses view it. Instead it is money invested in securing the grounds around your local community which has, on a personal level, brought us further into Bromsgrove, revitalising the home-grown community spirit which is far too rare in this age of global Internet culture.

For more information about our security company in Birmingham, contact us now or complete our online quotation form for a free no-obligation quotation and start securing your business today.

This website uses cookies to improve your experience while you navigate through the website. Out of these cookies, the cookies that are categorized as necessary are stored on your browser as they are essential for the working of basic functionalities of the website. We also use third-party cookies that help us analyze and understand how you use this website. These cookies will be stored in your browser only with your consent. You also have the option to opt-out of these cookies. But opting out of some of these cookies may have an effect on your browsing experience.
Necessary Always Enabled
Necessary cookies are absolutely essential for the website to function properly. This category only includes cookies that ensures basic functionalities and security features of the website. These cookies do not store any personal information.
Non-necessary
Any cookies that may not be particularly necessary for the website to function and is used specifically to collect user personal data via analytics, ads, other embedded contents are termed as non-necessary cookies. It is mandatory to procure user consent prior to running these cookies on your website.
SAVE & ACCEPT